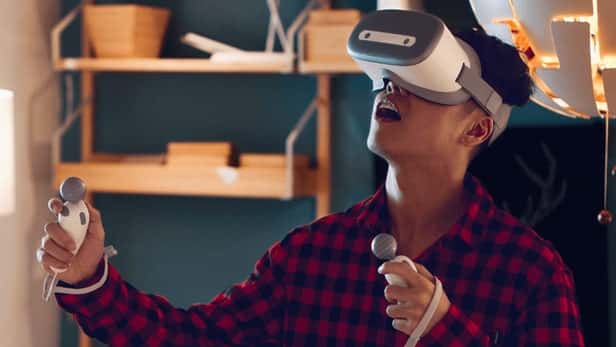 One of the primary goals of VR Tech News is to be a guide for those that are getting acquainted with Virtual Reality. A lot of shorthand and terminology gets thrown around and it can get difficult to keep up. Well fear no more! Here’s a list of common terms used when discussing VR.

3DoF Or 3 Degrees of Freedom also called rotational/orientation refers to a type of head tracking in VR. One is able to turn their head left and right, tilt up and down, and roll their head from side to side. Think about it similarly to how modern first person games map camera controls to the right analog stick.

6DoFOr 6 Degrees of Freedom also called positional tracking refers to the type of head and body tracking in VR. In addition to the movement found in 3DoF, one can move forward/back, left/right, and up/down. Think about it similarly to how modern first person games map movement controls to the left analog stick.

AR or Augmented Reality is the composite of a person’s view of the real world, with computer generated imagery laid on top. Examples include Snapchat filters or mobile apps like Pokemon Go.

Directional Sound Also referred to as Spatial Audio is sound mixed to give the illusion of depth. Basically surround sound.

Eye Tracking refers to the ability of a VR headset to be able to tell the direction a user is looking.

FOV is short for Field of View. In terms of VR, FOV is the total viewable display of the virtual world within a headset. FOV is measured in degrees and the higher the FOV, the more immersed one feels in VR.

Foveated Rendering is a rendering technique that uses eye tracking to essentially create peripheral vision in a VR space. Eye tracking is used to determine where is user’s eye is focused on the total FOV available. The area where the user is focusing is fully rendered, while the area the user is not focused on is only partially rendered.

FPS stands for frames per second. It refers to the number of images (frames) shown on a display per every second of time. The higher the FPS, the smoother the experience feels.

Hapticsor Haptic Feedback, is a response that can be felt by touch, such as “feeling” the weight of virtual objects when picked up.

Hand Tracking refers to the ability of sensors to be able to monitor and keep note of the movements of a user’s hands with the VR space.

Head Tracking refers to the ability of sensors to be able to monitor and keep note of the movements of a user’s head with the VR space.

HMD stands for Head Mounted Display. Also referred to as a VR headset, it is the current delivery method of VR experiences. HMDs are made of screens viewed through goggles and strapped to the user’s face. Some are self powered (like the Oculus Quest) while others require PCs to provide power (like the Valve Index)

IPD stands for interpupillary distance. IPD is simply the space between the center of the pupils of a person’s eyes, measured in millimeters. It is important because a HMD takes IPD into consideration when forming the 3D effect when viewing an image.

Inside-Out Tracking refers to the method used for positional tracking where head and hand tracking is done by sensors from within a HMD.

Latency (or lag) is the amount of time measured between an action and its response. The more latency present, the more the immersion is broken during the experience.

Locomotion In terms of VR, locomotion is the method player movement is achieved. There are a variety of types of locomotion used in VR from using 6DoF and room scale to allow users to physically walk around in a VR play space, to pumping one’s arms to simulate walking, to allowing players to teleport from location to location.

MR or Mixed Reality is the composite of AR and VR. Both real world and virtual world objections can interact with each other in real time.

Outside-In Tracking refers to the method used for positional tracking where head and hand tracking is done by external sensors and not from a HMD itself.

Pancake is a slang term used to describe video games or apps that do not use VR.

Room scale is the term for VR experiences that allow the user to freely move around in a designated play area. In said play area, the user’s movement is tracked and mimicked in VR.

Stitching In terms of VR, stitching is taking the visual data from two or more camera, analyzing the data, and combining it into a 360 degree view that can be experienced in VR.

VR or Virtual Reality is a computer-generated experience that features interactive aspects, usually with the use of special controllers and HMDs.

VR Sickness is a condition similar to motion sickness, where the user experiences a disconnect between what their brain and body believe they are doing. Symptoms can include nausea, disorientation, dizziness, apathy, sweating, or fatigue.