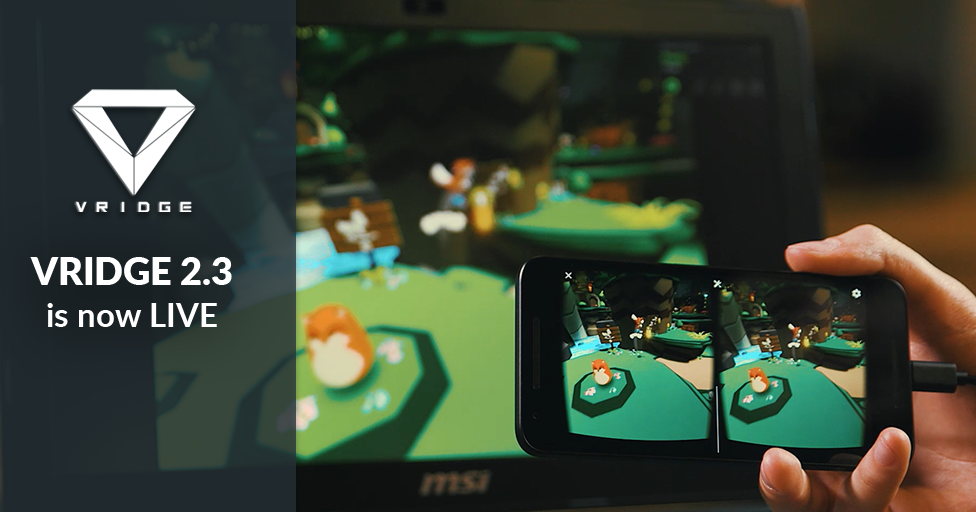 Lead Management: The Essential Foundation of B2B Growth in Any Economy Now is the time to maximize what's possible from leads - an increasingly scarce and valuable resource. Download this eBook to learn why a strong lead management foundation is imperative for B2B growth in any economy. Get the eBook » The Activ5 fitness system by Activbody could be a perfect solution for digital-based exercising. This Bluetooth-enabled portable workout and strength training device for men and women coaches users through five-minute full body workouts and measures data such as strength, precision, and other personal metrics.

No sweat and no gym required. That phrase piqued my interest to try this new approach to strength building.

Much of my daily work routine is sedentary. I sit or stand behind a computer screen hunched over a keyboard. I live in a four-season locale that often restricts access to strenuous outdoor activity due to ever-changing weather.

Perhaps those factors make me a prime candidate for using Activ5's approach to getting more fit. It even offers me an alternative to being a couch potato on inclement weather days. It's also a handy addition to using my motorized indoor exercise bike.

Still, I was a bit skeptical about making any real progress in strength building from pressing my palms together against this electronic device. I have to admit, however, that the burn of my muscles became a welcome sensation the more I put the Activ5 regime through its paces.

It not only auto-installs apps, but also renders the phone unusable when the user attempts to uninstall the preinstalled malicious software.Thanks to the open source nature of Android, manufacturers can create custom versions of the OS on their devices with their own unique sets of preinstalled apps.

The brown and orange Activ5 exercise module is roughly teardrop shaped and palm sized. On the side bottom edge is an on/off button and the LED. The device has no other controls on it. 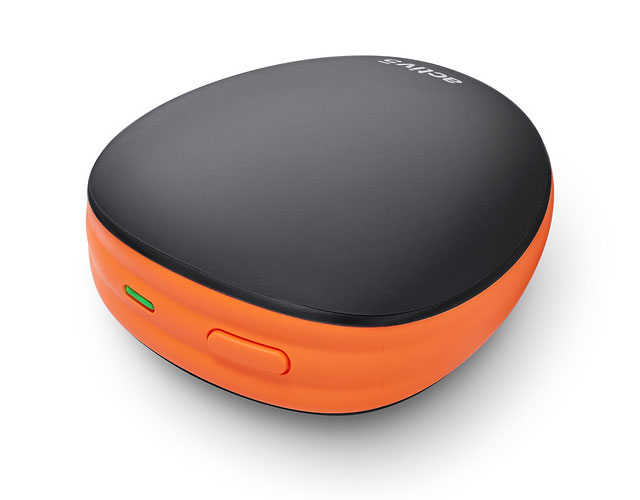 You hold it between your palms and adjust its position by where you place your arms and body, bent or standing, and whatever other position the exercises tell you to take.

Activ5 is lightweight with an ergonomic shape that makes it easy to press. It easily accommodates exercising while standing, sitting, or even laying on your back or side.

The device is easy to use while sitting or standing in your office or work cubicle; and is convenient to use while riding as a passenger in a car, on an airplane, or public transportation. 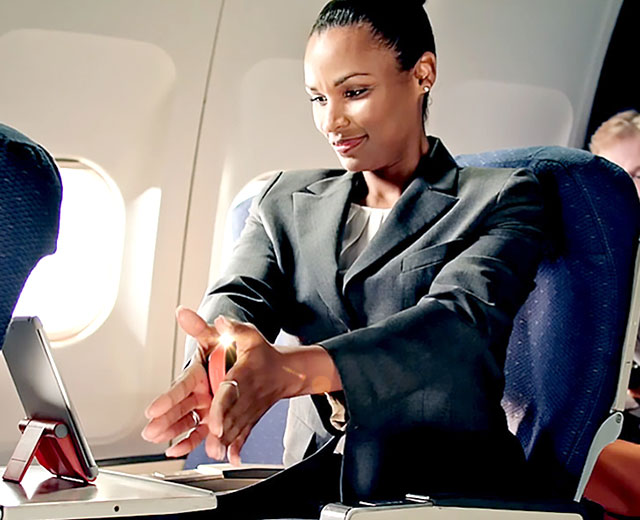 Prone position is used in some of the exercises when you have space and privacy to stretch out on a couch or floor mat. Exercising with Activ5 from a prone position lets you add your knee for pressing the device pads together. Another combination is to use one knee and a hand to apply pressure.

Included in the package is an adjustable, sturdy plastic mobile phone holder. This is supposed to let you see the exercise displays while you power through your workout. But my phone with its protective case was a tad bit too bulky to fit in the overly thin holding curve at the base of the stand. The tall size of my phone also contributed to the apparent top-heavy tumbling. 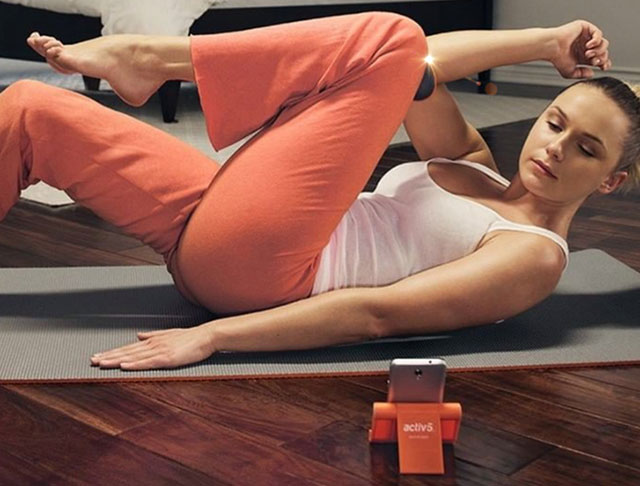 The Activ5 device is designed for use with apps and games running on Bluetooth-enabled smartphones, tablets, or an Apple Watch. It is also designed for charging-free use. Activ5 ships with a AAA battery that lasts up to a year, according to the manufacturer. Replacing it requires just prying off the side pressure panel.

The first step after unboxing is to download the Activ5 app from either Apple's App Store or Google Play.

Step two is turning on the Activ5 device, making sure that your mobile device has Bluetooth turned on and visible for pairing. When the LED on Activ5 blinks green, you are good to go.

Step three is to follow the prompts on the device running the Activ5 app to complete the device's setup.

Set up was quick and simple. It nearly automatically paired with my Android phone. That is significant because both my Samsung and Motorola phones do not usually play nice with sharing on Bluetooth.

The Activ5 app setup uses a game method that involves pressing the Activ5 hand unit to complete strength and alignment assessments. The only glitch I encountered was entering my birth date. The app preselected the year and would not let me correct it despite clicking the edit icon on the app screen. This date display is a minor problem. I could not see any relevance to the adjustment made in assessing my physical strength based on my age.

The setup, like using the device for exercising, involved pressing the two sides of the device between my hands. The sensors measured the sustained strength of my arm muscles.

A few other quick games measured my durability and dexterity. The assessments are based on the ability to keep pressure on the hand device raising arms to direct a drone-like icon along a jagged flight path on the app's display.

Activ5 training is based on isometric exercising. Each exercise is tailored to your assessed muscle strength. It is important to apply your best effort in the initial setup game.

That establishes your max power as a baseline. The Activ5 training app dynamically creates your personalized coaching curve for each exercise. 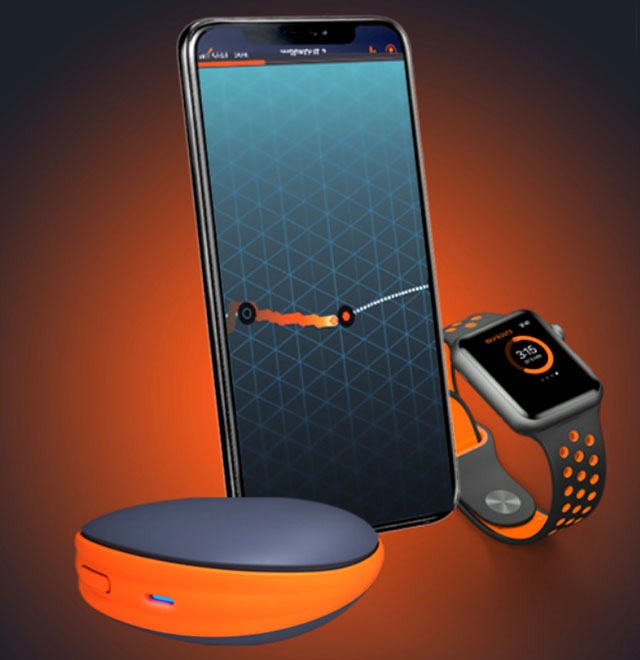 Follow the directions the app displays for each training program and exercise you do. Depending on the exercise at play, the screen encourages you to use more pressure or adjust your position.

Some of the displays have you navigate the device to keep the cursor-like icon steady on the line. You speed it up by applying more pressure, or ease off the pressure to slow down the progress and direction along the prescribed path as you hold the described pose.

Isometric exercises pit half your muscles -- the ones the exercise has you flex -- against the other half that are at rest. The dynamic pressing and holding in place for varying lengths of time strengthen the muscles.

The proprietary device measures your applied force in pounds and tracks your performance gains. The Activ5 training regimen includes over 100 games delivered as part of the updates to the app as your training progresses.

What sold me on this device is it efficiency. The computer game-like workout and progress screen have no learning curve. Plus, it does not take much time to complete the exercises.

Ideally, use Activ5 for a complete workout in five minutes, three times a day. The app coaches you through each exercise and program to build your strength and endurance.

Your success results from your grip. How you hold the Activ5 device is reflected in what the app calculates as you exercise. It is a two-step process.

One, apply pressure from the heel of your hand, not the palm. Two, to properly engage the targeted muscles, keep your fingers separated, not intertwined.

The user interface is clean and simple. It has tabs to access training programs, workouts, and exercises. Touch a displayed activity to launch your guided workout session.

To accurately track your increased strength over time, the developer recommends resetting your max power every 7 to 10 days.

Activ5 normally sells for $149.99. When I received the review unit, the website was offering the unit for purchase on sale for $109.90. 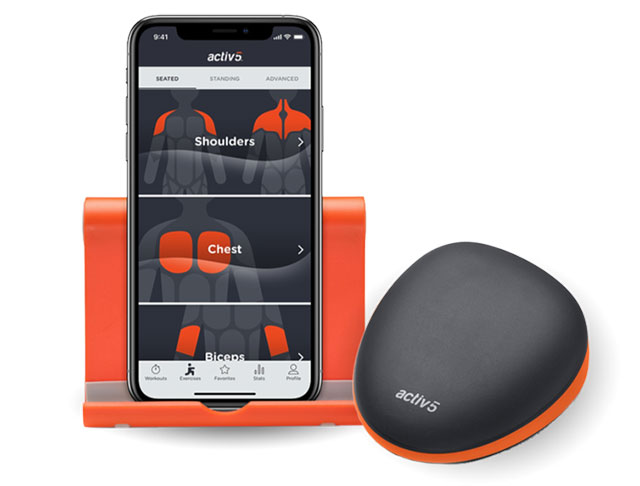 The package includes a free download code for the Activ5 app. This offer is a bit confusing because I never had to enter the device name or the serial number labeled on the box. The download was already free.

I have yet to encounter an exercise through the app that required purchase. Of course, I am still working my way through the programs after a few days of use. So in-app purchases may still show up.

Given the price of the unit, I would not look kindly on having to shell out too much money for advanced level exercises.