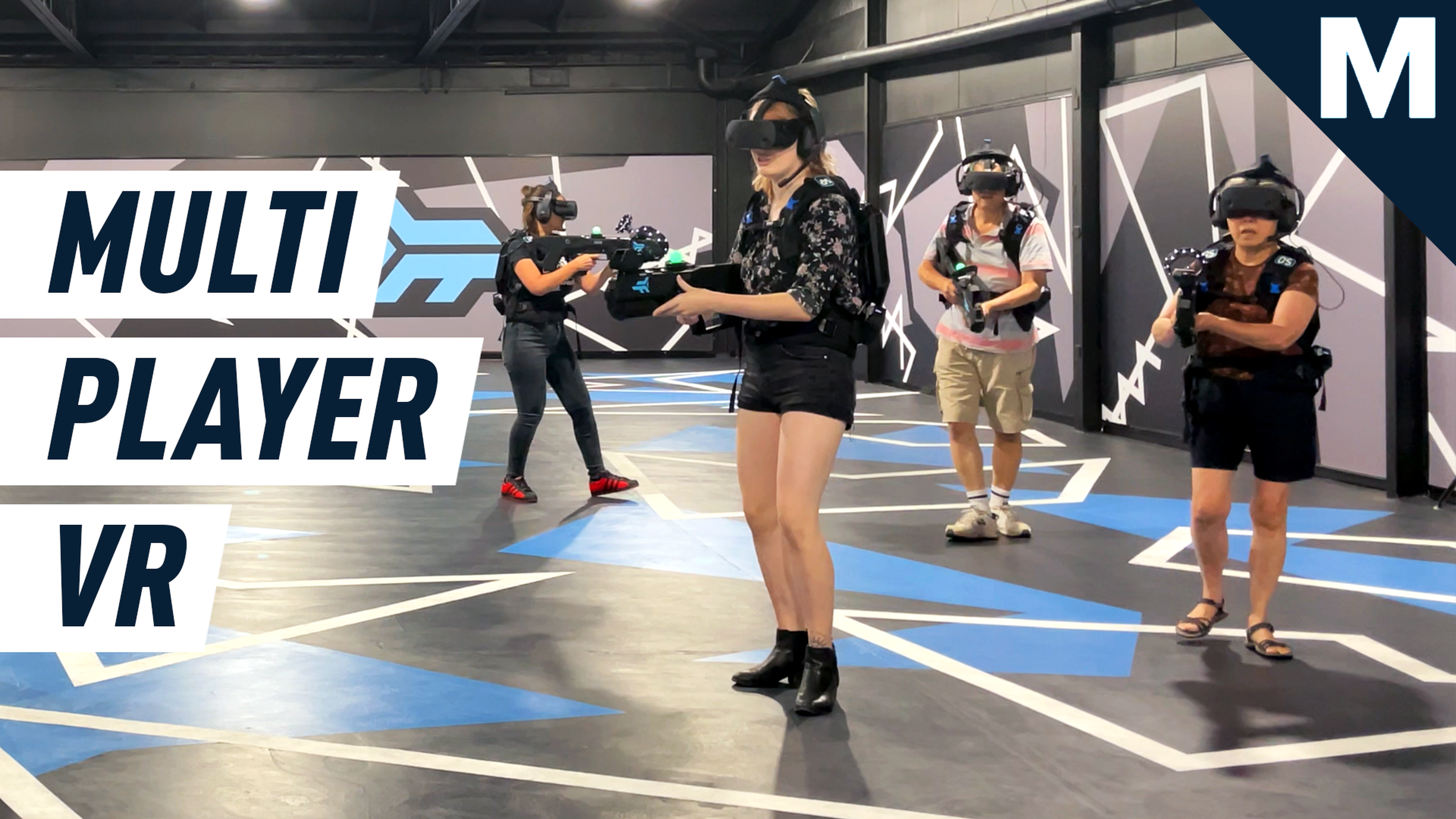 My mum doesn't like action games. She thinks they’re too complicated and loud to be any fun, which is fair. Yet when I took her to free-roaming virtual reality venue Zero Latency VR she was immediately immersed in mowing down enemies, shouting in a mix of amazed joy and confused panic.

“Oh no! He was right in front of me! Go away you sickos!”

It seems that if you want to make someone understand the fun of video games, basically putting them inside one is a pretty good place to start.

Launched in Melbourne, Australia in 2015, Zero Latency VR lets you strap on a headset and backpack, grab a gun controller, and physically explore a virtual world with up to seven friends. Like venues such as The VOID and Hologate, Zero Latency VR adds a VR spin to location-based entertainment, and claims to be the world's first free-roaming virtual reality venue. There are now 46 Zero Latency VR venues in 22 countries around the globe, but I was invited to visit the new Sydney location which opened at the end of 2020.

Fortunately the coronavirus pandemic is relatively under control in Australia, and the staff took precautions. Tags indicated the equipment had been cleaned between sessions, and hand sanitiser was provided both at reception and in the spacious waiting area. The fact that only one session can run at a time also ensured no contact with other groups, so the whole experience felt very safe.Different venues have different selections of games you can choose from when booking, such as a player vs player shooter and a cooperative puzzling adventure game, with more on the way. Sydney had two options at the time of my visit, both of which were cooperative shooters.

The first was Singularity, a sci-fi adventure where you blast murderous robots on a space station. The simple story is that you’re trying to find out what happened to the crew, though the gameplay consists of walking around and shooting rather than investigating or puzzling.

The second game was Undead Arena, a '80s-style game show where the game is "kill the zombies before they eat you." This was really just a thinly veiled excuse for a good ol’ fashioned shooter, and it served its purpose just fine. Though we were initially worried the zombies would be too scary, Undead Arena easily sits in the realm of action rather than horror.

Sessions took place in an enormous empty room and were was approximately half an hour long, excluding around 15 minutes of gearing up and being run through the controls. A maximum of eight people can play per session, however we had six in our group of friends and family, ranging in age from our mid-20s to late 60s and with varying video game experience.

Beat Saber is undoubtedly one of the most addictive PSVR games to date, and it’s easy to pick up and play right away regardless of your VR experience level.

Our eclectic mix weren’t a group you’d typically expect to see running and gunning, yet it was one of the most enjoyable team compositions we could have had. Shooting monsters is a ton of fun by itself, but helping each other navigate the virtual world added another layer of enjoyment. More tech-savvy players happily guided teammates who were having problems understanding game cues, making us feel more like a team, and we coordinated to cover each other as enemies approached from all sides.

Exploring together and hearing everyone's varied reactions to the virtual environment was also hilarious, especially since my mum screamed throughout the entire experience.

Everyone in my group had a ton of fun, regardless of their age or experience. It didn’t matter if they didn’t play video games often, or if they typically preferred Words With Friends over CS:GO. If you can physically point and shoot a Super Soaker full of water, you can handle Zero Latency VR’s gun controller. It’s simple to use, with only three buttons plus a shotgun style pump action, and all of them are easily reachable even if you can’t see your hands. 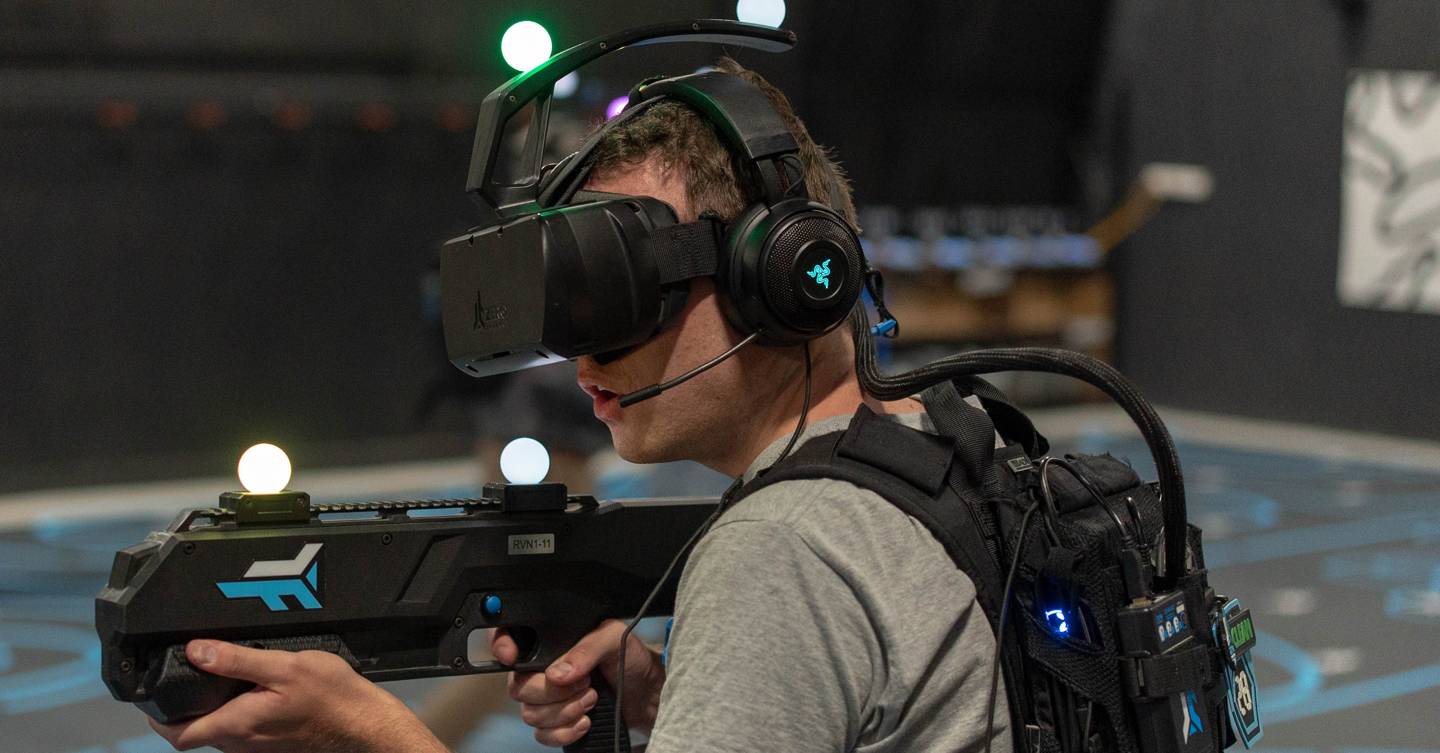 Can epic laser tag save virtual reality from being a total dud?

Granted, the gear is a bit heavy. The gun weighs 2kg (4.4lb) and the power pack on your back weighs 6kg (13lb), which feels like a hefty load when you first put it on. But most people won’t notice once they’re in the game, and even two back to back sessions weren’t long enough for it to become a problem for us.

You know you're perfectly safe, but it can certainly feel thrillingly real

Of the two games we played, I personally preferred sci-fi shooter Singularity. The 30-minute game cleverly took advantage of the VR medium to play around with perspective and the environment, having you cross dangerously high bridges and walk up vertical walls. Intellectually you know you’re perfectly safe, but it can certainly feel thrillingly real — particularly if you let go and allow yourself to believe your eyes.

It wasn’t entirely smooth sailing. Though we entered our heights into a tablet before we started, apparent calibration issues meant our avatars crouch-walked throughout the adventure. We also had to pause and resync my sister’s wayward gun at one point, and my dad’s flailing arms looked very broken.

However, these were relatively minor hiccups that didn’t detract much from the overall experience. One of my friends even became so immersed that she had to remove her headset to get past the precarious bridge. It’s the type of reality warping you’d hope a VR game like Singularity would lean into, especially since no other medium can do it as successfully.

Undead Arena was also fun, but it could have used more variation. The game mainly focused on shooting waves of zombies in a comparatively stagnant location, without any of the exploration or clever environmental tricks found in Singularity. There were moving platforms that could be used to reach higher vantage points, but I largely found myself standing still while shooting. Players get two 15-minute games per session, so you can get used to the gameplay in the first round before trying to get on the leaderboard in the second.

Mowing down the undead is always entertaining, and Undead Arena did make my mum scream more. But if I only got one VR experience, I’d go for Singularity because it makes the most of the format.

Unfortunately, Zero Latency VR is a bit pricey. The Sydney venue charges $AU59 per person from Tuesday to Thursday, and $AU69 from Friday to Sunday. In the U.S. it’s around $50, depending on your choice of game and location. It feels like a bit much for half an hour and certainly isn’t a regular weekend activity, especially considering laser tag costs less than half that price.

Even so, Zero Latency VR is a fun treat for a birthday or special occasion, and provides an interesting new experience your friends probably haven’t tried before. And if you want to give it a go, you should definitely try to round up a group. You’ll enjoy yourself with strangers, but it’s always more fun killing zombies with your friends — and even better with your parents.